Following are some of the most spectacular and famous itineraries and descents.

Roisette 3.300 mt.
Departure: from Breuil-Cervinia
Difficulty: medium
Exposure: Southern facing
Panorama: Monte Rosa - Valtournenche - Val d'Ayas
From this peak, situated between Valtournenche and Valle d’Ayas, a magnificent view is offered over the Mt Rosa mass. Landing just under the peak (3,300 m) and after the first few curves on a difficult slope, it becomes a fast-running descent arriving in the beautiful basin of Cheneil (2,100 m), where time seems to have stopped. In this area, it will be possible to taste the local aosta valley cuisine. Also, when snow conditions permit, it is possible to ski down to Maën (1,300 m), zig-zagging through the pines and old villages. Return to Cervinia by mini-bus.


Château des Dames 3.200 mt.
Departure: from Breuil-Cervinia - Colle di Vofrède
Difficulty: medium
Exposure: Northern facing
Panorama: Cervino – Breuil basin
Thanks to the almost completely northern facing exposure, this descent is characterised by consistent powder cover. A classic descent but also one of the best, it is particularly appreciated by snowboarders. Landing at the Vofrède pass (3,200 m), it offers various possibilities, including of a difficult level. After the last canal admire the great Cervino then continue on to the trout lake (1,900 m).


Colle del Breuil 3,300 mt.
Departure: from Breuil-Cervinia
Difficulty: medium
Itinerary: via Refuge Oriondé, Cherillon and Montabel glaciers
Exposure: Southern facing
Panorama: Cervino – Breuil basin
Landing at the foot of Mt Cervino (3,300 m) and after having crossed a few gorges, arrival at the Refuge Oriondé. From here skis run fast over the glaciers of Cherillon and Montabel, and then down to the cross country skiing track in Cervinia (2,000 m). The southern exposure quickly transforms the snow into spring conditions making it an ideal descent for the less experienced powder snow skier.


Porta Nera 3.750 mt.
Departure: from Breuil-Cervinia - Polluce Roccia Nera
Difficulty: hard
Itinerary: Furri Zermatt 1,850 m via Schwarzergletscher and Gornergletscher
Exposure: Northern facing
Panorama: Alps
A magnificent descent on the Mt Rosa mass. Landing between Roccia Nera and Pollux (3,750 m) the descent is along the glacier Schwarzegletscher until it joins with the largest Mt Rosa glacier, the Gornergletscher. The completely northern facing exposure means the snow remains powdery also in spring and it is truly fantastic. Curve after curve crossing near ice crevices that nature has transformed over time into wonderful sculptures. Arriving at Furi (1,850 m) in Switzerland, you can taste the specialty of Zermatt, Rösti". Return to Cervinia via the lifts, with the possibility to visit the ice sculptures in the ice caves at the exit of the Piccolo Cervino lift.


Monte Rosa 4.300 mt.
Departure: from Breuil-Cervinia
Difficulty: medium
Itinerary: Furi Zermatt via Schwarzergletscher and Gornergletcher
Exposure: North-eastern facing
Panorama: 360° Alps
8:30 AM Direction Zermatt By lifts to fly to Mount Rosa. Descent towards Zermatt down one of the most immense and breath-taking glaciers of Europe, nearly 16 Km. !!! Return in Cervinia via cablecar from Furi Zermatt (not included).


Verra Glacier 3.850 mt.
Departure: from Breuil-Cervinia - Col di Verra
Difficulty: medium
Itinerary: Verra plain via Refuges Lambronecca and Mezzalama, Verra glacier
Exposure: Southern facing
Panorama: Polluce - Castore - Mt Rosa
Landing on the Mt Rosa mass between the famous twins: Polluce (4,091 m) and Castore (4,228 m). After admiring the panorama the fantastic descent starts along the Verra glacier, passing by both the Refuge Lambronecca and the historic Refuge Mezzalama, continuing on to the blue lake and finishing this enthusiastic, long descent, with southern exposure, between the trees of the Verra plain (2,500 m). From here it is possible to call the helicopter to re-experience another emotional descent choosing from the Roisette, the Porta Nera or Mt Rosa…or descent to Champoluc (1,700 m), return to Cervinia in mini-bus.


Dome de Tsan 3.350 mt.
Departure: from Breuil-Cervinia
Difficulty: hard
Itinerary: Lake Cignana 2,100 m, via glaciers "de tsan” and "de Roisette”
Exposure: Southern facing
Panorama: Cervino and Breuil basin
Landing on the glacier "de Tsan” (3,350 m) then continuing onto the glacier "Roisette”. This wild descent is characterised by narrow canals and wide valleys, particularly suited to the outrageous snowboarder. Arriving at the Lake Cignana (2,100 m) where the helicopter picks up and continues on to "Château des Dames” or "la Roisette”. 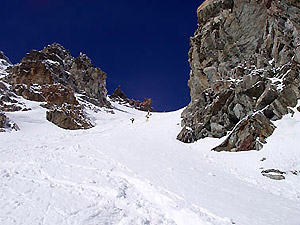 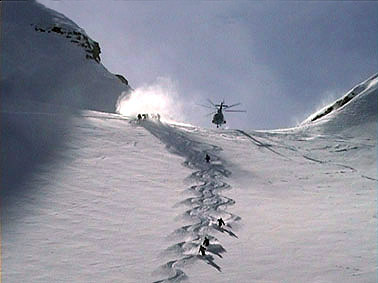 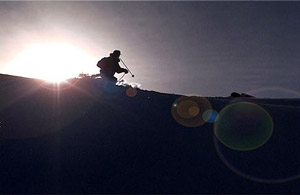 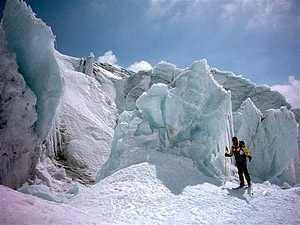 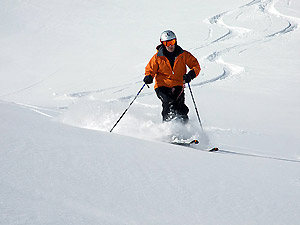 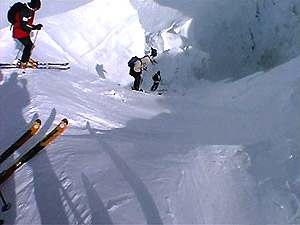 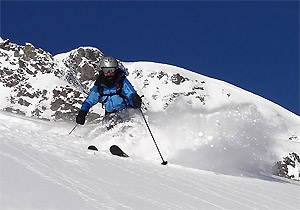 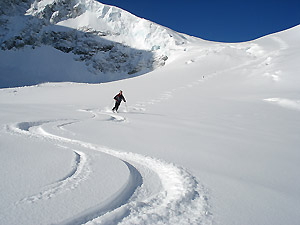